There’s a lot of love-hate for Canada’s anti-spam legislation (CASL, for short).

As a consumer, it’s pretty great. No more spam, right? If you’re an organization that sends electronic messages related to “commercial activity”, i.e anything, it’s a real pain in the A.

Which is why we’re here to help.

But before we get into the nitty-gritty of one of the world’s toughest anti-spam laws, let’s look at a few key terms you should be familiar with. So here it is, our CASL glossary. Feel free to refer to it if and when something slips your mind. 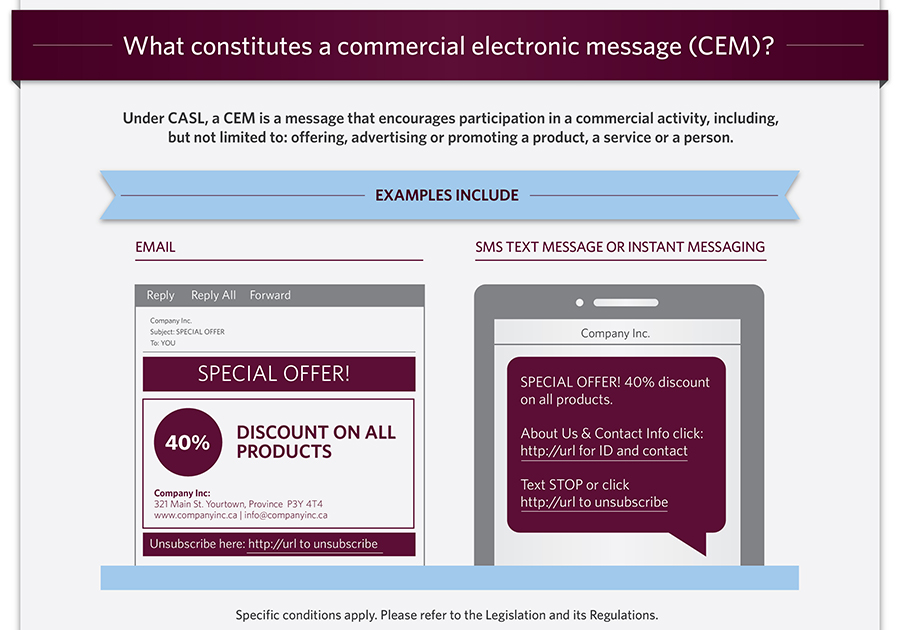 Like I said above: pretty much any email you, an organization, would send out is covered under CASL. That’s why it’s important to make sure you’re always CASL-compliant. If not, you could be fined by the CRTC by up to $10 million per infraction. That’s a lot of loot. And definitely not worth the gamble. So like they say: better safe than sorry.

Express Consent: Of the two “consents”, this one’s easy-peasy. It’s when a person has explicitly agreed, either orally or in writing, to receive CEMs. Typically, this happens through some kind of opt-in mechanism.

Remember: you can’t pre-check boxes to toggle a recipient to opt-in. They have to do it themselves. Once someone expressly consents to receiving CEMs, you can email them to your heart’s content for as long as you’d like, unless they decide to opt-out, in which case, bye-bye.

Implied Consent: This one can be a bit confusing. A good way to think about implied consent, at least in a general way, is that it comes from a pre-existing relationship between an organization and a recipient. There are four situations that imply consent, so let’s get more specific.

Conspicuous publication: someone’s address is published in plain sight, either online or in a publication. Important note: if their address specifies that they do not want to receive CEMs, you can’t send them one. Let’s say you find someone’s email address on their Twitter profile and attached to the byline of a blog they wrote. If in one of these instances they request not to receive unsolicited emails, then you have to respect that.

Disclosure: someone gives you their address; for example, a business card.

If someone conspicuously publishes or gives you their address, you have implied consent, but only to send them CEMs that relate to their line of work. In other words, your CEMs must be directly relevant to them.

Existing Business Relationship: someone who has already made an inquiry, transaction, an application or written contract for purchasing or bartering goods, products, or services.

Existing Non-Business Relationship: someone who is a member of your organization, has volunteered or provided you with a gift or donation.

Generally, implied consent is time-limited to two years (six months, if someone has made an application or inquiry to a business). This means you need to track all your consents and have records for each. The onus is on you to provide evidence that consent has been given in ALL instances. CASL’s Guidance on Implied Consent accepts the following as acceptable records:

The Anatomy of a CASL-Compliant CEM

Now that we’re clear on CEMs and the different types of consent you need before sending out a message, let’s take a look at how you can guarantee your commercial electronic messages are CASL-compliant. Each CEM must contain three things: (1) consent, (2) identification, and (3) an unsubscribe mechanism. We’ve already discussed consent, so let’s break down the final two.

Anyone who plays a material role in your CEM must be identified to the recipient. In instances where you’re sending out a message on behalf of a large group of people, it’s okay to link to a webpage identifying those people. Whatever the case, the rule is fairly intuitive. Be clear who the sender is. 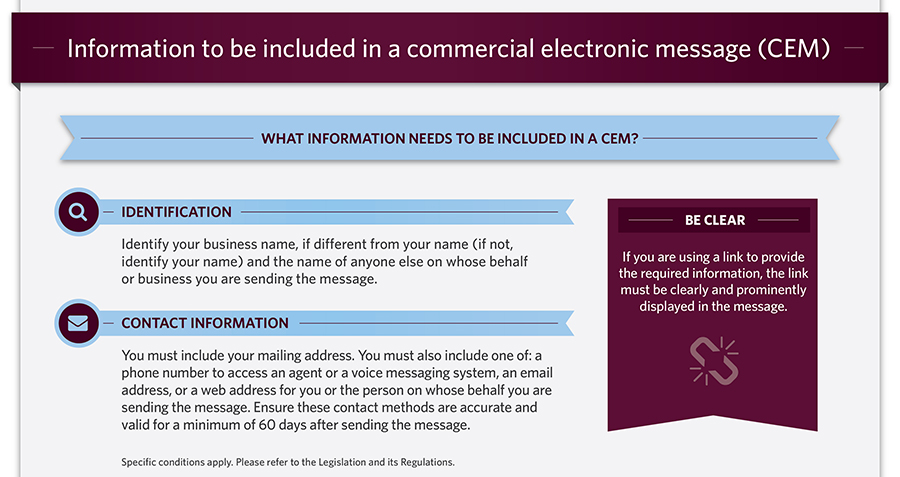 Not everyone has to be CASL-compliant. If you’re:

Everyone, unfortunately (or fortunately, depending on who you ask).

That means if you’re an individual, business, or professional organization, you need to be mindful of your external communications.

Another thing to consider: social media. The same consent rules apply to any CEMs you might send via Facebook messenger, Twitter’s direct messages, or LinkedIn’s InMail. And “Likes” do not imply consent, either, neither does someone accepting an invitation to connect.

While the CRTC hasn’t pursued anyone for social media infractions since CASL was implemented July 1, 2014; it only just fully came into effect July 1, 2017. Something to consider. This can make things extremely difficult for your outbound communications, but not impossible.

Knowing the ins and outs is just the beginning when it comes to CASL. Next week we’re going to explore best practices to securing express consent from each of your prospects and tools you can use to track implied consents. Pretty soon you’ll be the King (or Queen) of CASL.

Remember: if you have serious legal concerns regarding Canada’s anti-spam legislation, consult a lawyer!

For better or for worse, politics have gone wireless.

How to Write a Social Media Policy for Your Professional Organization

Facebook's Paid Advertising is Getting the Transparency Treatment

Facebook’s recently come under fire. And with good reason.

Our tips and tricks to staying CASL compliant.

5 Digital Tools Your Union Should Already Be Using

Digital will improve your engagement, reach, and influence in the public sphere. Finally, it'll boost your membership numbers.

Apologies in advance, some of these are truly terrible. I mean, uncomfortable-to-sit-through terrible.

Switching your Website From Blah to Brilliant With NationBuilder

Making the big jump from your blah legacy system to NationBuilder is easy.

The Membership Management Software Showdown: Who Will Win?

Our methodology for ranking these spots is pretty straightforward: their effectiveness and their ability to convey a message compellingly. Our second criterion is obviously pretty subjective, but oh well, feel free to disagree with us!

Here’s our complete guide to running a great conference, on and offline.

If you’re a stakeholder in a business, it’s likely you’ve been ignoring one of Facebook’s most powerful tools. And guess what? It just got a whole lot more powerful.

Let's look at how associations can leverage some of the big changes to Facebook’s group feature to turbocharge their membership.

Facebook’s New Mission Statement and What It Means for Marketers

Something huge happened on June 22nd…

Big Data for Little Budgets: How to Build a Market Segmentation Strategy