If you’re anything like us, you’ve volunteered for a phone-bank. Maybe it was for a local politician or a community group. If not, that’s totally okay. You’ve definitely been on the receiving end of one of these calls (it goes without saying that you were one of the polite ones, of course).

Phone-banks are an essential part of any political campaign, though they’re also used by businesses and associations. By using the power of the phone, phone-banking lets you access massive groups of people. Whether you’re collecting important data, following up on a direct mail campaign, fundraising, or executing a Get Out The Vote (GOTV) campaign, phone-banking lets you touch base with people and encourage action. And did we mention it’s cheap?

This one’s a given. The foundation for any successful phone-banking strategy. Maybe you’re looking to notify voters about an event, add important data to your voters list, inform the public about an offer or new product, or build community support for a cause. Whatever the case, before executing, know exactly what you want to accomplish.

But remember: don’t try to do too much! Define your objectives and be realistic with them. Each of your calls should be around ninety seconds, which means you need to prioritize exactly what you want to say. This is why it’s absolutely essential to have some kind of script (more on this later).

Volunteers are the lifeblood of every phone-banking operation. Without them… well, good luck!

Seriously though, finding a group of committed volunteers is half the battle. There are plenty of ways of doing this. For one, you could set up a website calling for volunteers. Something like this. If you’re set up on NationBuilder, it’s as easy as making an action page. Then promote it like crazy.

Or—and this is the most effective way we can think of—simply use NationBuilder’s people tab to find your staunchest supporters. Maybe it’s a group of people you tagged who were at a recent event. Maybe it’s your biggest donors. Just be sure you’re targeting your most engaged supporters. The people who’re likeliest to invest their valuable time to help promote your cause. Reach out to them and make the ask.

Finding volunteers doesn’t have to be difficult. If you build a phone-banking operation that’s efficient and organized, more people will want to get involved. All you have to do is inspire confidence. Easier said than done, right?

Thankfully, there’s a piece of software that promises to make your volunteers’ lives a lot easier. We use it all the time. It’s called CallHub. It conveniently integrates with NationBuilder and allows your volunteers to login from anywhere using their cellphone or computer. The system assigns them calls, auto dials, and its interface shows them your script. Plus, it lets you input survey questions, contact information, or call-specific notes for each callee. All of this data auto-syncs with NationBuilder, so you can easily pull it up there, too. Finally, CallHub only charges you for the calls you make, giving you more control over your expenses.

Now you’ve got your group of core volunteers and they’re ready to fight the good fight. If you’re curious, see how the French political party Les Republicains was able to recruit 400 volunteers and make nearly one-million calls in just four months!

Script writing is a definite art form—even in phone-banking. Remember, when someone picks up the phone and decides to engage with you, they’re willingly donating precious, precious time to your cause. So don’t waste it. Make sure your script is comprehensive, but brief. At most, ninety seconds. Some people will be extremely chatty; others, well… not so much.

Most importantly, be clear about your ask. For example, if you want to know if a callee will be supporting your political candidate, ask them. If you’re running a GOTV campaign, ask your prospective voter if they know where they’re going to vote, how they’ll get there, and when they plan on voting. Don’t be afraid to include some kind of follow-up, either.

Like the big guys, you can automate training by building a how-to video with assets that walk phone-bankers through the entire process. If your approach is more grassroots, maybe you’re the one training your volunteers. If that’s the case, it’s always useful to revisit phone manners. For example, try to smile while you’re talking, never argue with a callee, that kind of thing.

It’s important that everyone’s on board with your message and that they’re familiar with your script and the technologies you’ll be using. But try to keep it fun, too. If your callers are operating out of a shared space, build a sense of community, and keep the space loaded with food and drinks.

Let’s say you want to call people who voted for you during the last election. To make things more manageable, you want to target these people in a specific area to determine whether or not you still have their support. You can filter these users by location and voting history, assuming you’ve tagged them, and build a list from those who are callable. Through NationBuilder you can also split lists and assign them to your volunteers.

Whether your volunteers call from landlines or virtually, from the comfort of their own homes, will totally depend on what makes the most sense to you. You can use click-to-call with NationBuilder, Google, or Skype; set up a virtual caller; or do things the good old-fashioned way.

With NationBuilder, volunteers can easily call people directly from the control panel by navigating to the lists assigned to them. 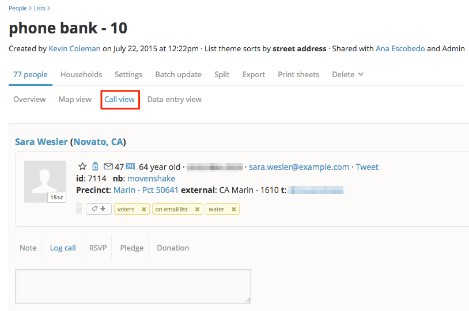 From the call view, they can find a contact’s number as well as blank fields where they can enter data directly into a person’s profile. Using the voter support example from above, let’s say a phone-banker calls a previous supporter and discovers that they’re undecided. The volunteer can log that information and tag the user. After the call is complete, the contact will be removed from the list and the phone-banker will receive a new callee.

If your volunteers are working from paper lists, they can manually input their information later on by accessing the Data entry view tab. 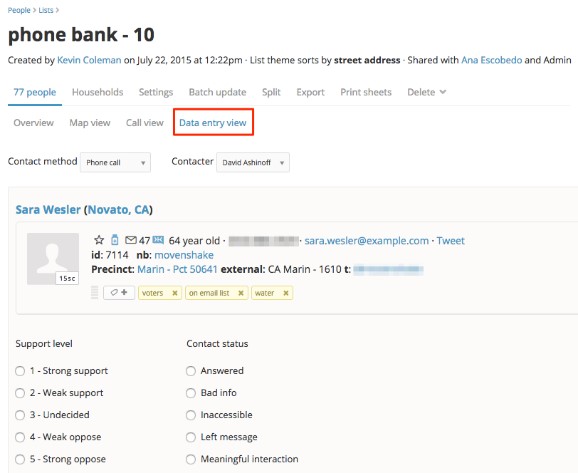 Being able to smoothly integrate a person’s profile details and contact information all in one place makes running a phone-banking operation that much easier. To give yourself the best chance of success, look for tools that streamline the process. That let you contact people, input their data, and efficiently pull it for later use.

Keeping with the voter support example I’ve been using, now you’ve got a list of people who’ve confirmed that they’ll vote for you. You also have a list of undecided voters. Maybe you have your candidate approach them for a door-to-door campaign to address some of the issues they discussed with your phone-banker. This is a great way to get them back into the fold.

Lastly, show your volunteers how grateful you are. These are the people who will continue to support you, so it’s in your best interest to acknowledge their efforts, victory or defeat, with a solid thanks. A well-run phone-banking effort is a great way to build a rapport with your followers and develop a strong sense of community.

Have anything to add? We love comments. We especially love debate, so if there’s anything you disagree with, let us know! If you have any questions or would like to talk more about phone-banking (or anything else, for that matter), get in touch!

For better or for worse, politics have gone wireless.

How to Write a Social Media Policy for Your Professional Organization

Facebook's Paid Advertising is Getting the Transparency Treatment

Facebook’s recently come under fire. And with good reason.

Our tips and tricks to staying CASL compliant.

5 Digital Tools Your Union Should Already Be Using

Digital will improve your engagement, reach, and influence in the public sphere. Finally, it'll boost your membership numbers.

Apologies in advance, some of these are truly terrible. I mean, uncomfortable-to-sit-through terrible.

Switching your Website From Blah to Brilliant With NationBuilder

Making the big jump from your blah legacy system to NationBuilder is easy.

The Membership Management Software Showdown: Who Will Win?

Our methodology for ranking these spots is pretty straightforward: their effectiveness and their ability to convey a message compellingly. Our second criterion is obviously pretty subjective, but oh well, feel free to disagree with us!

Here’s our complete guide to running a great conference, on and offline.

If you’re a stakeholder in a business, it’s likely you’ve been ignoring one of Facebook’s most powerful tools. And guess what? It just got a whole lot more powerful.

Let's look at how associations can leverage some of the big changes to Facebook’s group feature to turbocharge their membership.

Facebook’s New Mission Statement and What It Means for Marketers

Something huge happened on June 22nd…

Big Data for Little Budgets: How to Build a Market Segmentation Strategy